On June 9, the Independence II headed out to the wreck of the Bidevind for our first off-shore trip of the year.  Bright sunny skies coupled with mild air temperatures made it a great day for diving.  Water conditions weren't too shabby either.  A surface current fell off below 30 feet, visibility on the wreck was over 50 feet, and the surface water temperature has reached a comfortable 62 degrees making deco rather pleasant.

The dive deck was open soon after reaching the site as Bill and Brandon made quick work of the tie-in.  As the divers were getting dressed and preparing to splash, a lift bag with Brandon's initials was spotted next to the boat.  Since the surface viz was so good, it was easy to see that something good was attached to the bag.  After we hauled the brass window frame on board, I couldn't wait to get in the water.

I was to be the last team to enter the water so that we could pull the hook on our ascent.  One benefit to diving last is to get information about the wreck prior to getting underwater.  **shout out** to Brandon for kindly sharing directions to a nearby porthole wedged under a pipe.  It was wedged pretty tight but we thought two divers may be able to work it loose. So when it was time for my dive, I made a last minute decision to leave the camera top-side and focus on the chance of some brass.  Bottom conditions were as good as promised from the other divers, and we saved some time by not running a line.  It wasn't necessary since I never left sight of the anchor strobes.  I could hear the engines of the boat start up indicating the line was free and ready for our ascent.

Sean quickly located the porthole just as Brandon described.  I took a few minutes while Sean was getting his crowbar out, to look around the area and definitely spied some other dogs sticking out of the sand.  There are other portholes just waiting to be uncovered.  By the time I focused my attention back to the task at hand, Sean had freed the backing of the porthole.  It turned out that the halves were not connected and the swing plate was really jammed under the pipe, but the backing needed just a little leverage from the crowbar to free up.  We worked as a team to rig the artifact to the lift bag and quickly heard the boat engines engage indicating the bag reached the surface!  We didn't have enough bottom time remaining to work on the swing plate so it's still there.  Seems like a great reason to go back!  I was happy to ascend into some warmer water for my deco since I couldn't get my vest to turn on today.  Otherwise, my deco was rather uneventful...just the way it should be :) 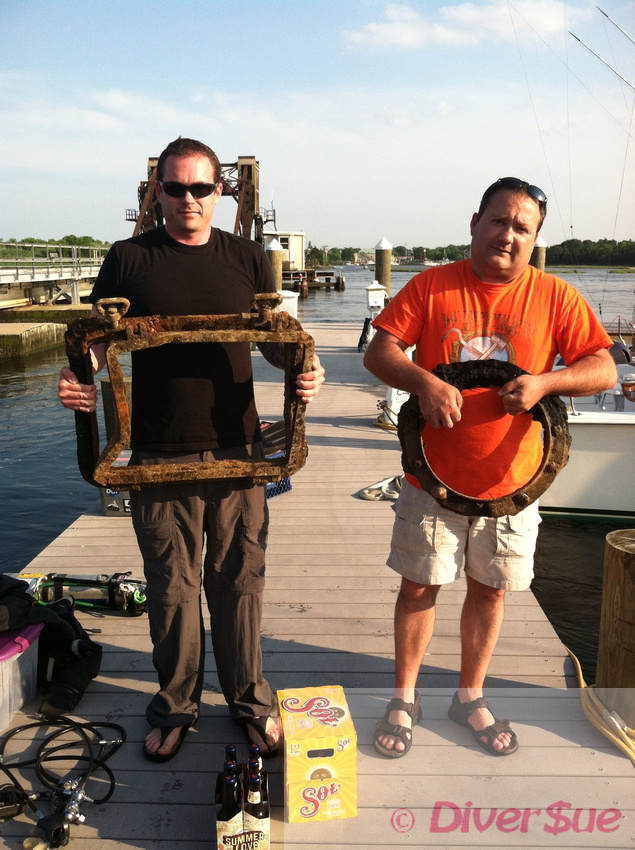